“Hits from start to finish”. Not every rock band can guarantee this. Only a band of legendary stature can pull it off. Journey absolutely can. Their fans know this for a fact that's why they never stopped believing in them after all these years. As they take on this 2020 tour run, they tagged The Pretenders as well for the ride. Neal Schon (founding member and lead guitarist), Ross Valory (co-founding member and bassist), longtime members Jonathan Cain (keyboardist) and Steve Smith (drummer), and Arnel Pineda (lead singer) — they will be your pilots onstage that will take you to stratospheric musical heights as Journey & The Pretenders cruise by the Blossom Music Center on Tuesday 30th June 2020 So unfasten your seatbelts, this is going to be a rip-roarin' Journey! Book your tickets now! 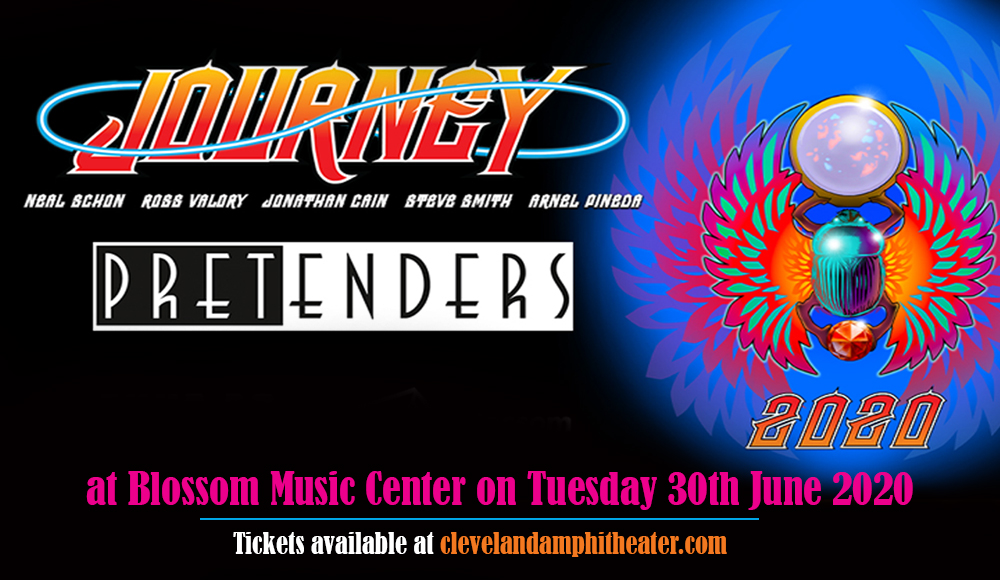 Through lineup changes and hiatuses, Journey has been through it all. But fans have never stopped believing that their favorite arena rock band will pull through and come flying high, as they always do. Well, Journey did not diappoint. Journey was described by AllMusic as having cemented a reputation as "one of America's most beloved (and sometimes hated) commercial rock/pop bands". Love 'em or hate 'em, no one can refute the fact that Journey sells, bigtime!

"Don't Stop Believin'", originally released in 1981, bounced forward to 2009 when became the top-selling track in iTunes history among songs not released in the 21st century. From 1973, the band has clinched 19 Top 40 singles, resulting in one diamond, ten platinum (including seven consecutive multi-platinum albums between 1978 and 1987) and three gold albums. With 5 million records sold and their name stamped with it, Journey is considered one of the world's best-selling bands of all time. A 2005 USA Today opinion poll named Journey the fifth-best U.S. rock band in history, and placed at No. 96 on VH1's 100 Greatest Artists of All Time. Journey also now holds a place in the Rock and Roll Hall of Fame , awarded to them in 2017. "Lights", "Faithfully", "Any Way You Want It", "Open Arms", "Wheel In The Sky", "Separate Ways (Worlds Apart)" and the seminal "Don't Stop Believin'", are literally show stoppers that will make you sing your heart and lungs out, and yes — from start to finish.

If you aren't buying tickets as of yet, you'll be missing out on one of the most awesome concert experiences on this planet!