The voice of a generation that went on to become a bonafide legend, James Taylor is one of the world's greatest living songwriters! With a brand new album, American Standard, Taylor comes to Blossom Music Center on Saturday 31st July 2021 (Rescheduled from Friday 11th June 2021) to perform a night of beloved songs in the confessional, moving, yet understated way that only he can! The highly-awarded artist will lend his voice to a variety of classics, including "Almost Like Being In Love," "Pennies from Heaven," "My Heart Stood Still" and "It's Only a Paper Moon." Taylor will be joined for the evening by a very special guest – fellow songwriting legend Jackson Browne! 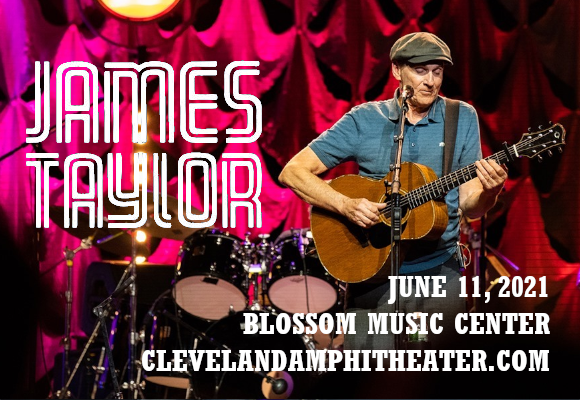 Singer, songwriter and guitarist James Taylor altered the course of music in the 1970s with his introspective folk rock songs – starting a musical movement and inspiring many of his peers who, alongside him, became some of the greatest songwriters of the era. An active musician from the early-1960s, he showed great promise, but was also troubled by herion addiction for many years. In 1968, he was signed to the newly-founded Apple Music – the record label formed by the Beatles – and the following year, he released his self-titled debut album. Although well-received critically, the album was not well-promoted due to Taylor's hospitalization at the time of its launch. Upon his discharge, he set to work recording his next album, Sweet Baby James, which turned the tide for his music career. The record was released in 1970 and was hailed as an instant classic, driven by the single "Fire and Rain," which became a hit. That was the beginning of a groundbreaking career, in which Taylor has released 40 albums that have earned gold, platinum, and multi-platinum status, and has become one of the best-selling music artists of all time, having sold more than 100 million records worldwide. A five-time Grammy Award-winner, he was inducted into both the Rock and Roll Hall of Fame and the Songwriters Hall of Fame in 2000, and has been the recipient of both the Presidential Medal of Freedom (2015) and the Kennedy Center Honors (2016). His 20th studio album, American Standard, is released in 2020.