Zac Brown Band are on the road for the second time this year, heading to Blossom Music Center on Thursday 10th September 2020 for a very special show! The show is part of the band's Roar with the Lions Tour, which sees the award-winners performing a variety of songs from their acclaimed career in a specially curated set that will thrill and delight fans!

“Our summer tour is inspired by the folklore surrounding the figure of the lion. I am a Leo, and all of the guys in the band are lions,” said Zac Brown. “They exemplify strength, courage, intelligence, and loyalty, and work in tandem to defend their territory and one another. The crowd is our pride – rooted in togetherness and fiercely loyal. They always show up for each other, no matter what, just like our fans always show up for us. We can’t wait to hear you roar with us!” 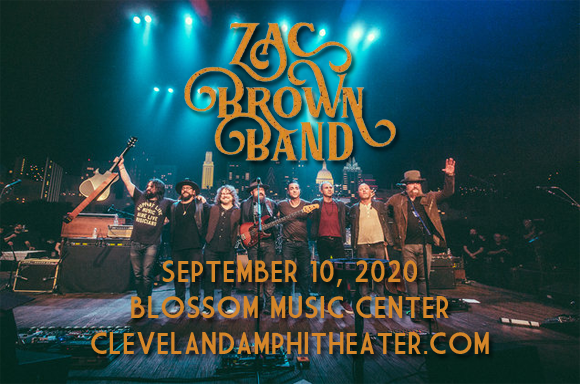 Zac Brown Band first made waves in music in 2008 with the five-times platinum-selling number one single “Chicken Fried.” The single preceded their first major-label album The Foundation, which also launched the hits "Whatever It Is," "Toes," "Highway 20 Ride" and "Free" (the latter three of which also reached number one) and was certified five-times platinum by the RIAA. The band have diversified from their original country rock sound over the years, drawing influence from a wide variety of musical genres over their seven studio albums, which has cultivated a sound that is utterly unique to them. Over the years, the band has charted 16 singles on the Billboard Hot Country Songs or Country Airplay chart, including 13 number ones. Their most recent album, 2019's The Owl, reached number two on both the Billboard 200 and the UK Country Albums charts, and number one on the US Top Country Albums and Independent Albums charts.