Country and bluegrass lovers, you’re in for a treat. The amazing Zac Brown band is hitting the road once again in 2018 for the Down The Rabbit Hole tour, coming to the Blossom Music Center on Thursday 2nd August 2018 – it's guaranteed to be an incredible show!! Tickets always sell out FAST for this act so don’t wait about – get yours NOW while you still can!! 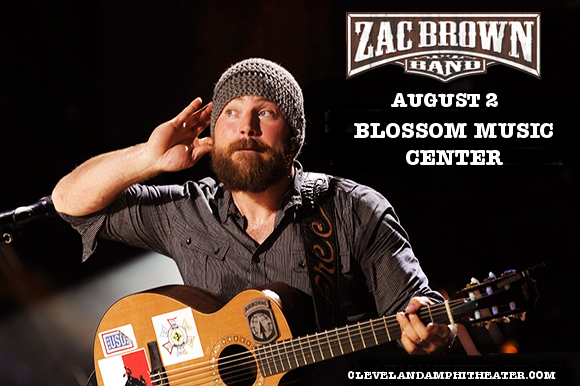 Comprised of founder Zac Brown in addition to Coy Bowles, Clay Cook, Daniel de los Reyes, Matt Mangano, Jimmy De Martini, Chris Fryar and John Driskell Hopkins and featuring a variety of instruments including the mandolin, banjo, and steel guitar, the Zac Brown have been delivering exceptional, down-to-earth country music since 2002. Their first major release, “The Foundation”, was awarded Platinum certification no less than three times by the RIAA!   With a string of number one hits in the Country Airplay and Billboard Hot Country Songs charts including “Goodbye In Her Eyes,” “Highway 20 Ride,” “Chicken Fried,” and “Knee Deep,” to name just a few, it’s no wonder that the Zac Brown Band went on the be nominated for Grammy Awards many times over, having won three so far – and nominated for another this year for the leading single from their brand new album, 2017’s “Welcome Home!”

The band will be playing all the material from the new album live! Get ready for a massive country party on the 2nd August – get your tickets to see the Zac Brown Band live ASAP, while they last!!!