Veteran country music megastar Tim McGraw is hitting the road the summer, on his first solo tour in five years! The multi-award-winning singer's Here On Earth Tour comes to Blossom Music Center on Friday 24th July 2020, and will see the performer using his music to connect with fans, and help them connect with each other as they leave any troubles behind and just enjoy the ride!

"Anyone who knows me knows how much I love to be outside in the summertime playing music. Everyone is there, sharing the moment, having fun and letting loose,” says McGraw in a statement. “To be here on earth in this moment, together, sharing our love for music and getting through all that life is throwing us — that’s what it’s all about.” 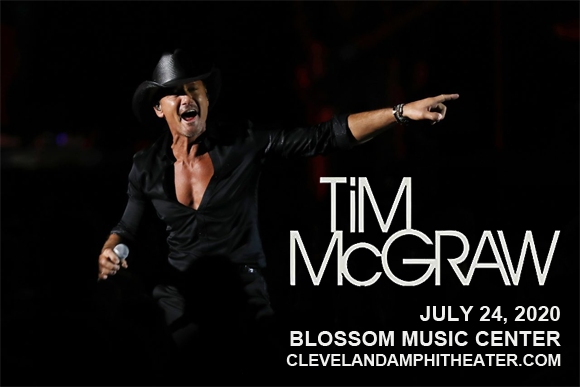 Son of star pitcher Tug McGraw, country music singer-songwriter Tim McGraw had long dreamed of becoming a star when he dropped out of college in 1989 to move to Nashville, Tennessee to pursue a career in music. He was signed to Curb Records the following year, and made his debut in 1991 with a self-titled album, but it was three years later, with Not a Moment Too Soon (1994) that he became a household name. The album was an enormous hit, topping the Billboard 200 and Top Country Album charts, winning McGraw two ACM Awards, and ending 1994 as the best-selling country album of the year. That was the springboard to the career he dreamed of, as McGraw continued to release chart-topping albums – 10 of his 15 albums to date have reached number one on the Billboard Top Country Albums Chart. These albums have also launched a total of 65 singles to date, including 25 number ones on the Hot Country Songs or Country Airplay charts. Three of McGraw's singles – "It's Your Love", "Just to See You Smile", and "Live Like You Were Dying" – were the top country songs of 1997, 1998, and 2004 (respectively) according to the Billboard Year-End chart. McGraw's success has earned him a wide variety of awards over the years, including three Grammy Awards, 14 Academy of Country Music awards, 11 Country Music Association (CMA) awards, 10 American Music Awards, and three People's Choice Awards. McGraw's Soul2Soul II Tour, which he embarked upon with his wife Faith Hill from 2006-2007, was the highest grossing tour ever by a country artist until Taylor Swift's "The Red Tour" in 2014, and one of the top five grossing tours of any musical genre.