Thomas Rhett is bringing one hell of a party to Blossom Music Center on Saturday 6th June 2020 on his Center Point Road Tour! Rhett is unstoppable at the moment and is fast becoming one of the shining stars of Nashville, smashing it in both the country and crossover charts! He'll be playing tracks from his number one, Grammy Award-nominated 2019 album, and mixing it up with all sorts of surprises! Not only that, but he's bringing with him a support line-up that any country fan will love: Cole Swindell and Hardy! 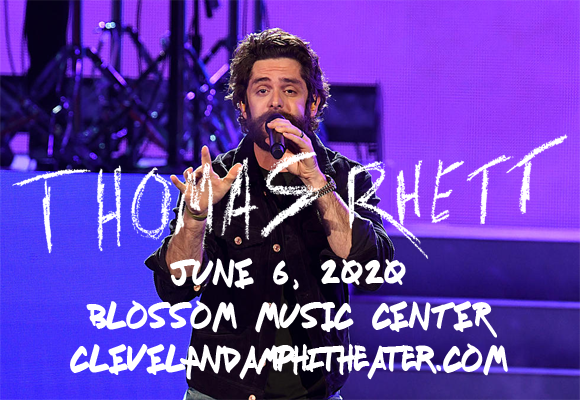 Having grown up around country music greats like his father, Rhett Aikins, and Tim McGraw and Brooks & Dunn, it's no surprise that Thomas Rhett decided to make his career as a country singer and songwriter too. Rhett was only 20 years old when he started writing for other country artists, including Jason Aldean, Lee Brice, Florida Georgia Line, LoCash and Michael Ray, among others. Then, in 2011, he began his solo career, signing with Valory Music (an imprint of Big Machine Records). To date, he's released four studio albums: It Goes Like This (2013), Tangled Up (2015), Life Changes (2017). and Center Point Road (2019) – and his last two have both debuted at number one on the Billboard 200, with Center Point Road also earning a Grammy Award nomination at the 62nd annual Grammys in 2020. Rhett has also charted 13 number one singles on the Billboard Hot Country and Country Airplay charts, including: "It Goes Like This", "Get Me Some of That", "Make Me Wanna", "Crash and Burn", "Die a Happy Man", "T-Shirt", "Star of the Show", "Craving You", "Unforgettable", "Marry Me", "Life Changes", "Sixteen", and "Look What God Gave Her".