Celebrating five decades in the music industry, The Doobie Brothers are coming to perform at Blossom Music Center on Thursday 9th September 2021! The laid-back hitmakers will be treating fans to songs from their entire back-catalog, including the Michael McDonald years, as the singer will be joining them for this very special event!

“We’re truly excited about our 50th Anniversary Tour, as it’s a celebration of the band’s entire history,” Johnston said in a statement. “We’ll be performing songs from our full catalog, as well as new music.” 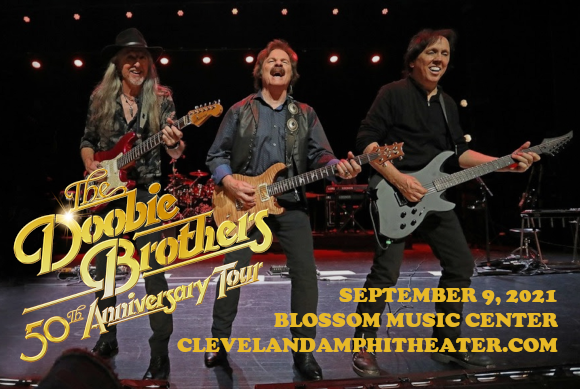 Known for radio hits like "Listen to the Music," "Black Water," "China Grove," "What a Fool Believes" and "Long Train Runnin'," The Doobie Brothers have been through a variety of incarnations since their inception in 1970, but they've remained a hit-making fixture of rock and roll for five decades. Helmed by two vocalists at various times; Tom Johnston, who favored a more traditional rock sound, and Michael McDonald, who brought the band a flavor of blue-eyed soul, The Doobie Brothers have had a string of gold and platinum albums in the U.S. Throughout the decades. In 2004, the band was inducted into the Vocal Group Hall of Fame and they are nominees for induction into Rock and Roll Hall of Fame in 2020.