The Beatles! Like you’ve never before heard them before, The Cleveland Orchestra with Martin Herman and Classical Mystery Tour present A Tribute To The Beatles at Blossom Music Center on Sunday, August 8th 2021. With symphony orchestra accompaniment. Sensational tribute band Classical Mystery Tour joins the Orchestra, performing all of The Beatles’ greatest hits from their early music to the solo years in original orchestrations. “Penny Lane,” “Yesterday,” “A Day in the Life,” and so much more! This is a must-see event for any Beatles fan, “Classical Mystery Tour, the world's best Beatles show with symphony orchestra,” says Broadway World! Book your place now! 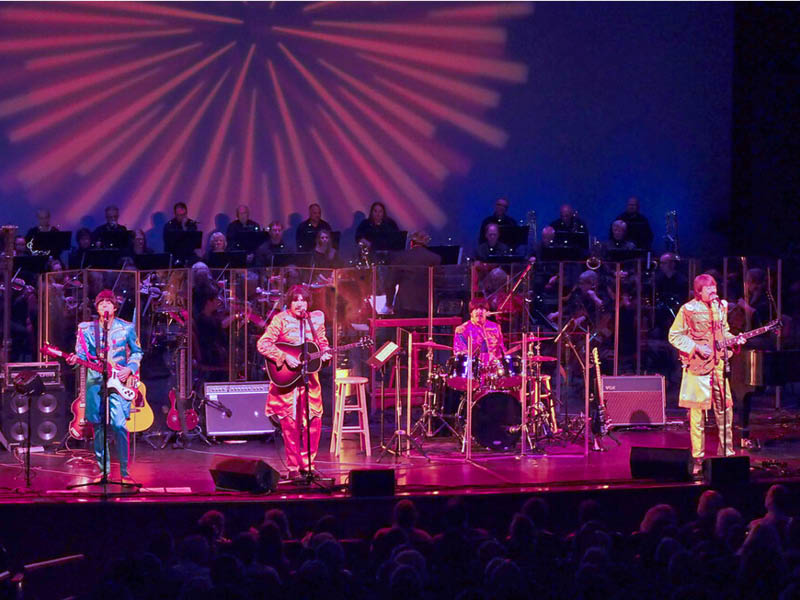 The nights entertainment will be performed by The Cleveland Orchestra, directed by Martin Herman, and the four musicians in Classical Mystery Tour.
The Cleveland Orchestra is made up of 100-plus members, its summer home is Blossom Music Center, and they tour in the United States and around the world, and at various residencies such as Miami and Vienna. Hailed as one of the very best orchestras on the planet, noted for its musical excellence and for its devotion and service to the community it calls home. The Orchestras Performances of standard repertoire and new works are unrivalled at home and on tour across the globe, and through recordings and broadcasts.

Known for his clarity, attention to detail, advocacy of new music by living composers, powerful interpretations of the classics as well as comfort with crossover popular concerts, he is one of today's versatile and promising conductors. Martin Herman is a composer whose acoustic and electronic works have been performed throughout the United States, Europe and Japan. He has recently conducted Das Sinfonie Orchester Berlin at the Berlin Philharmonie Kammermusiksaal, the Sydney Symphony Orchestra in the Sydney Opera House, the Philadelphia Orchestra, Odense Symphony Orchestra, Seattle Symphony, Detroit Symphony, North Carolina Symphony, Ft. Worth Symphony, Atlanta Symphony, Vancouver Symphony, Long Beach Symphony, and the San Diego Symphony. He also served as music director and conductor with Downtown Opera in Long Beach, California, conducting premieres of new operas in the U.S. and the Czech Republic. In the fall of 2009, he was conductor and music director at LaMaMa Theatre in New York City where he led performances of his one-act opera, The Doctor, based on Chekhov short stories. He has served as assistant conductor with the San Francisco Contemporary Music Players and conductor of the Berkeley Young Musicians Program Orchestra and U.C. Berkeley Summer Orchestra. Additionally, Mr. Herman has conducted several orchestra crossover projects in Amsterdam and Berlin. He was assistant to composer Gian Carlo Menotti in the production of his opera, “The Consul” at the Spoleto Festival USA, where he also apprenticed with the conductor Christopher Keene.

Classical Mystery Tour performs live in concert backed by a Symphony Orchestra, a true tribute to The Beatles. They look and sound just like The Beatles, but Classical Mystery Tour is more than just a rock concert. The full show presents some two dozen Beatles tunes sung, played, and performed exactly as they were written. Hear “Penny Lane” with a live trumpet section; experience the beauty of “Yesterday” with an acoustic guitar and string quartet; enjoy the rock/classical blend on the hard edged “I Am the Walrus.” From early Beatles music on through the solo years, Classical Mystery Tour is the best of The Beatles like you’ve never heard them: totally live. Featuring Jim Owen on rhythm guitar, piano, and vocals; Tony Kishman on bass guitar, piano, and vocals; Tom Teeley on lead guitar and vocals; and Chris Camilleri on drums and vocals. Martin Herman, who transcribed the musical scores note for note from Beatles recordings, conducts many of the Classical Mystery Tour concerts.