The Cleveland Orchestra presents Brahms' First Symphony at the Blossom Music Center on Saturday 10th August 2019 at 8 PM. This musical experience will be conducted by Maestro Asher Fisch while the violin will be presented by The Cleveland Orchestra’s very own Jung-Min Amy Lee. Move fast as tickets are expected to be sold-out for this beautiful performance. 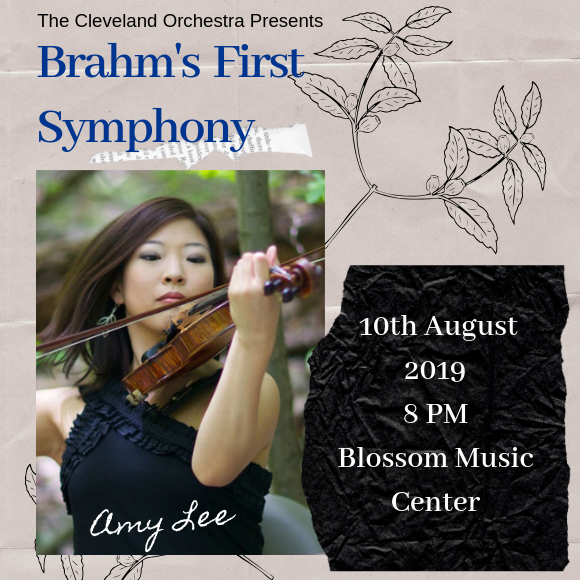 The Cleveland Orchestra very own Amy Lee will be performing as the lead violinist for Brahm’s First Symphony that will be conducted by Maestro Asher Fisch.

Ms Lee joined The Cleveland Orchestra as an associate concertmaster in March 2008. At the age of fifteen, Amy Lee became a soloist with the Philadelphia Orchestra. She holds a bachelor’s degree from the Curtis Institute of Music and a master’s degree from the Juilliard School.

Additionally, Ms Lee is a member of the Chamber Music Society of Lincoln Center Two program, participating in tours, a digital concert series and recordings, and educational outreach. Some of Amy Lee’s recognitions include winning the first prize in San Francisco’s Irving M. Klein International String Competition and at the Corpus Christi International Competition for piano and strings.

Her past performances were with the Santa Fe Pro Musica Chamber Orchestra, the National Gallery Orchestra, and Germany’s Baden-Baden Philharmonic. She is also a member of the Omni String Quartet, founded with three fellow members of The Cleveland Orchestra: Alicia Koelz, Joanna Patterson, and Tanya Ell.

When it comes to conducting an orchestra performing the symphonies of Brahm’s, Maestro Asher Fisch, an Israeli conductor is the best pick.
Fisch made his United States debut in 1995, conducting Der Fliegende Holländer at the Los Angeles Opera. From 1995 to 2000, he was chief conductor of the Vienna Volksoper. He served as music director of Israeli Opera from 1998 to 2008. Seattle Opera named him its principal guest conductor in October 2007.

Fisch first guest-conducted the West Australian Symphony Orchestra (WASO) in 1999. In May 2012, WASO announced the appointment of Fisch as its next principal conductor, effective 1 January 2014, with an initial contract of 3 years. By September 2015, the WASO announced the extension of Fisch's contract until the end of 2019. It was at WASO that Fisch recorded his love for Brahm’s Symphonies.