The Cleveland Orchestra, Baldwin Wallace University Music Theater program and Andy Einhorn present the ever so fascinating South Pacific In Concert at the Blossom Music Center on Saturday 24th August 2019 at 8 PM. Grab this chance to watch its award-winning music come to live! 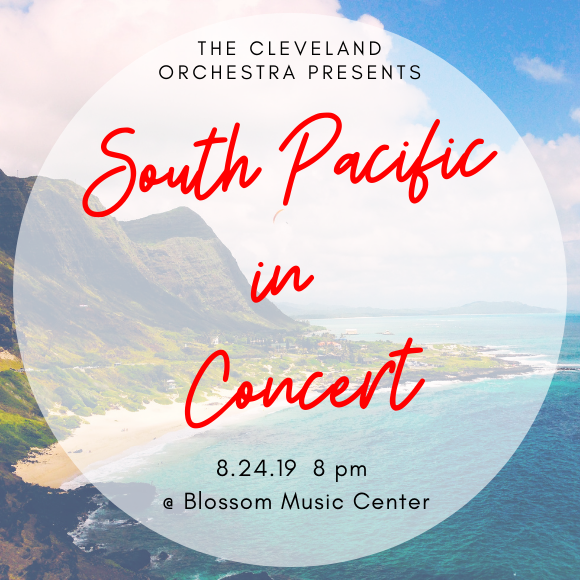 Did you know that The original Broadway production of "South Pacific" opened at the Majestic Theater on April 7, 1949?

The show ran for 1925 performances starring Mary Martin as Nellie Forbush and Ezio Pinza as Emile de Becque, won the 1950 Tony Award for the Best Musical, Libretto and Score and won the Pulitzer Prize in Drama in 1950.

South Pacific is set in an island paradise during World War II, where two parallel love stories are threatened by the dangers of prejudice and war. Its music was originally created by Rodgers & Hammerstein. It features treasured tunes such as “I’m Gonna Wash That Man Right Outa My Hair,” “Some Enchanted Evening,” “I’m in Love with a Wonderful Guy,” and “You’ve Got to be Carefully Taught.”

However, this concert adaptation that will be performed at the Blossom Music Center was created by David Ives for the Carnegie Hall benefit concert of SOUTH PACIFIC in 2006.

It is a great honor for The Cleveland Orchestra to be working hand in hand with leading Broadway conductor/music director Andy Einhorn in bringing this masterpiece to live.

In 2019, Einhorn directed concerts with the Baltimore Symphony Orchestra, National Arts Centre Orchestra, Tucson Symphony and the Vancouver Symphony Orchestra. Most recently he served as the Music Supervisor and Musical Director for the Broadway productions of Carousel and Hello Dolly! Einhorn’s previous Broadway credits include Holiday Inn, Woody Allen’s Bullets Over Broadway, Rodgers + Hammerstein’s Cinderella, Evita, Brief Encounter, The Light in the Piazza, and Sondheim on Sondheim. Einhorn served as music director and conductor for the Châtelet Theatre’s production of Sondheim’s Passion in Paris and has twice led the New York Philharmonic conducting for Audra McDonald and Chris Botti, respectively.