The Cleveland Orchestra presents Beethoven's Emperor at the Blossom Music Center on Saturday 3rd August 2019 at 8 PM. This musical experience will be conducted by Maestro Andrey Boreyko while the piano will be presented by the one and only Francesco Piemontesi. This is a performance you do not want to miss! 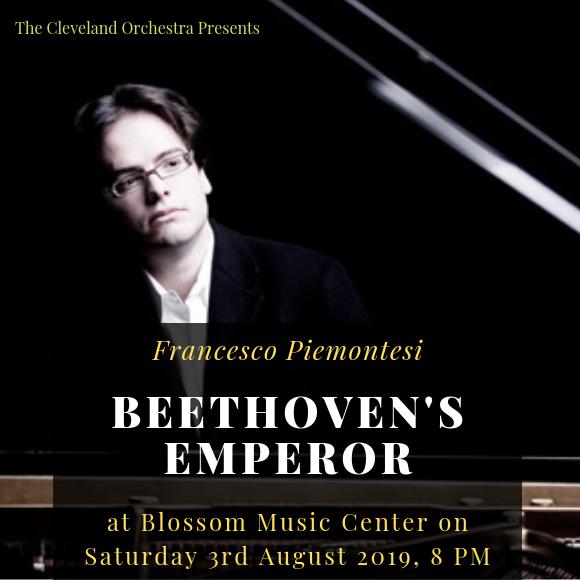 Renowned pianist Francesco Piemontesi is of exceptional refinement of expression. Every note he plays through his fingertips is allied to a consummate technical skill.

He is most popular for his interpretation of the Classical and early Romantic repertoire. Piemontesi also has a close affinity with the later 19th and 20th-century repertoire of Brahms, Liszt, Dvořák, Ravel, Debussy, Bartók and beyond. According to Piemontesi, Alfred Brendel, one of his most influential mentors, taught him “to love the detail of things”.

This time Piemontesi will be playing one of Beethoven’s most famous concert, nicknamed Emperor, to make you feel like royalty. The Beethoven’s Emperor was dedicated to his patron and pupil — Archduke Rudolf of Austria.

Leading The Cleveland Orchestra will be Maestro Andrey Boreyko, a Russian born conductor. Boreyko has conducted multiple performances around the world including in Canada, Belgium, Germany and so on.

This is a performance that no classical music lover can afford to miss out on. Purchase your tickets now to ensure your seat at this guaranteed wonderful experience.
Program of the night:
BEETHOVEN – Piano Concerto No. 5 (“Emperor”)
ZEMLINSKY – The Mermaid [Die Seejungfrau]