The Black Crowes will be performing their incredible debut album Shake Your Money Maker in full at Blossom Music Center on Wednesday 4th August 2021! The rock and roll renegades have reformed for their first tour since 2013 to celebrate the album's 30th anniversary!

Chris Robinson says: "I'm thrilled and blessed to be playing with my brother celebrating the music we've made and bringing our lives together full circle. Long live rock n' roll and The Black Crowes!"

Rich Robinson adds: "First and foremost, I'm really happy to have my brother back in my life. To be able to play music again together and celebrate the first record we made as kids is a gift. To have these songs stand up after 30 years is something I could've never fathomed." 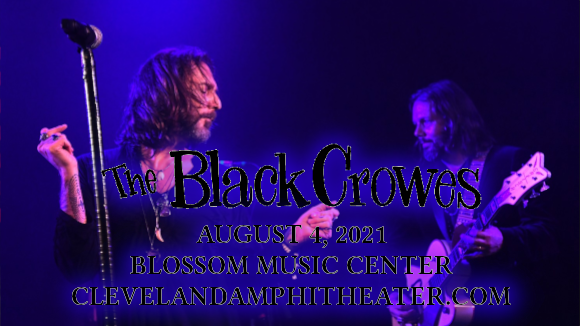 American rock band The Blakc Crowes was formed in 1984 by brothers Chris and Rich Robinson. With a nostalgic, rock and roll swagger, the band's 1990 debut album Shake Your Money Maker was a hit and earned them the title of "The Most Rock 'n' Roll Rock 'n' Roll Band in the World" from Melody Maker. Throughout their career, the group produced eight studio albums (including the number one album The Southern Harmony and Musical Companion 1992), four live albums and several hit singles, and sold over 30 million records. They have embarked upon two hiatuses, from 2002 – 2005 and again in 2014, but reformed in 2019 to celebrate the 30th anniversary of their debut.