Sowing seeds of excitement and anticipation is the phenomenal Tears For Fears, who recently dropped the announcement of their "The Tipping Point World Tour". The pulse of joy and exhilaration are now reverberating among fans who've had the pleasure of hearing the good news of tour dates from the band and a great brand new single to boot; not to mention a full-length studio album due for release in February 2022! “We couldn’t be more excited to start playing concerts again. We’ve missed seeing our friends on the road around the world and the energy of performing live,” Tears for Fears’ Curt Smith said in a press release. Catch Tears for Fears & Garbage at Blossom Music Center on Saturday 21st May 2022. The 'Get Tickets' link is your fast and easy way to score tickets to the show. Lock in your tickets now! 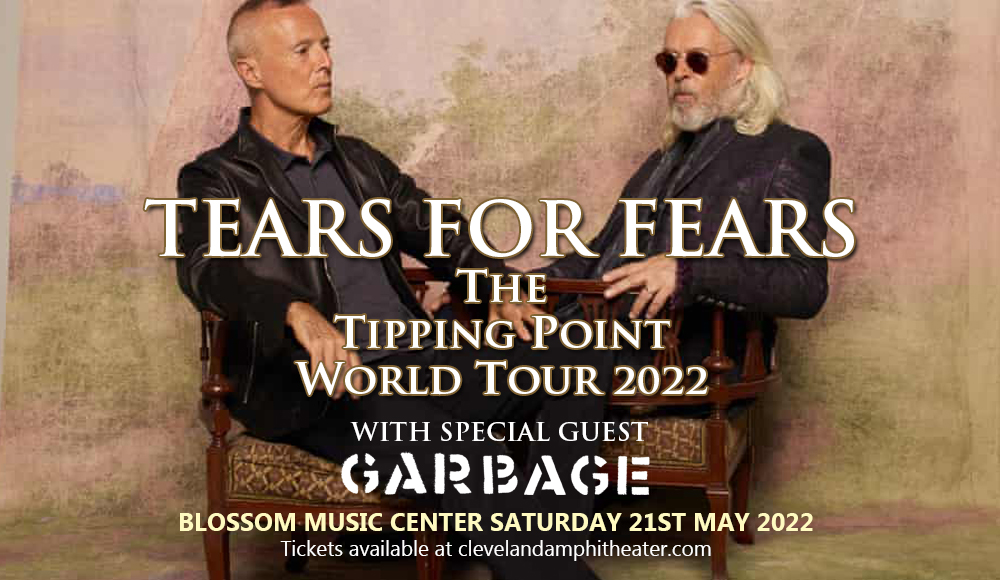 One of the trailblazing and most successful bands from the second wave of the so-called 'British invasion' was Tears For Fears. At the height of the age of MTV, Tears For Fears was a hit machine that spawned colossal hits such as "Mad World", "Everybody Wants To Rule The World", "Shout", "Head Over Heels", to name a few. Their debut album "The Hurting" (1983), was bubbling under the UK charts with singles like "Pale Shelter", "Change", "Suffer The Children", then zoomed up and reached number one on the UK Albums Chart propelled by the release of "Mad World". Tears For Fears were poised for world domination; and it soon came to pass with the release of their sophomore album "Songs From The Big Chair" which contained the two Billboard Hot 100 number one hits: "Shout" and "Everybody Wants to Rule the World".

Tears For Fears proved that they could not be categorized mainly as an 80s band, as they pushed the boundaries of their music and ushered in the 90s with the mind-blowing, Beatlesque masterpiece "Seeds of Love", with "Sowing The Seeds of Love" as lead single. The album was a multi-million seller, debuting the UK Albums Chart at no. 1, making the top 10 in the US and in numerous other countries. After an acrimonious split, Curt Smith left the band, as Roland Orzabal carried on the name Tears For Fears and managed to score top 20 hits such as "Break It Down Again" from the album "Elemental".

Fast forward to 2004… Roland and Curt ironed out their differences, started talking after 9 years, and came out with an album aptly titled "Everybody Loves A Happy Ending", and toured extensively up until 2017. However, seventeen years have passed since the ELAHE album… fans were growing anxious, up until in September 2021, Tears For Fears finally unleashed their brand new single "The Tipping Point", from an upcoming 2022 full album release.

"The Tipping Point has been a long time in the making", says Roland; "and we are looking forward to playing our favorites from the new album as well as our classics from throughout the years.” Indeed, Tears For Fears will fire up the stage once again as "The Tipping Point" World tour rolls out. Before you shout, click that 'get tickets' link to book those tickets now!