It's a trip down memory lane as two veteran alternative 90s acts head to Blossom Music Center on Monday 19th August 2019! This year, the inimitable Smashing Pumpkins have joined forces with Noel Gallagher's High Flying Birds for a co-headlining tour that is bound to pack a punch! Expect an evening of intelligently observed lyrics and moody guitars from the rock royalty headliners, as well as special guest support act AFI! 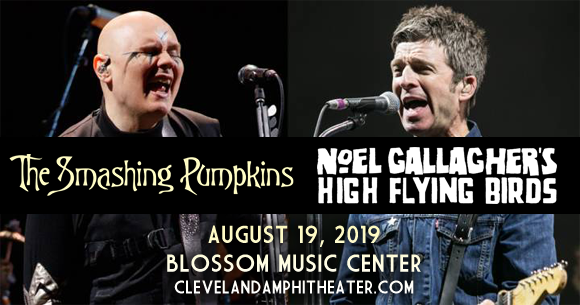 One of the most commercially successful and critically acclaimed bands of the 1990s, Smashing Pumpkins formed in 1988 in Chicago, Illinois, and made its name with a distinct blend of dreamy, guitar-heavy alternative rock. The group's 1993 album Siamese Dream brought them their first commercial breakthrough when it landed at number 10 on the Billboard 200. Their follow-up, Mellon Collie and the Infinite Sadness (1995), debuted at number one on the chart and eventually received diamond certification from the RIAA, as well as earning the band seven Grammy Award nominations in 1997, including Album of the Year and Record of the Year ("1979"), as well as nine MTV Music Video Awards nominations, eight of which were for the single "Tonight, Tonight", including "Video of the Year". Smashing Pumpkins have sold over 30 million albums worldwide to date. The band's current line-up consists of Billy Corgan (lead vocals, guitar), James Iha (guitar), Jeff Schroeder (guitar) and Jimmy Chamberlin (drums).