Billboard and Grammy Award-nominated country artist Sam Hunt releases his second studio album, Southside, this year to the joy of fans everywhere, and he's headed to Blossom Music Center on Thursday 20th August 2020 on the Southside Tour! The album has been six years in the making and features his massive hit singles "Body Like a Back Road," "Downtown's Dead," and "Kinfolks!" This also marks the performers first major tour in a while, so fans can expect something pretty special from the multi-platinum-selling star! Joining him in support are Kip Moore & Travis Denning! 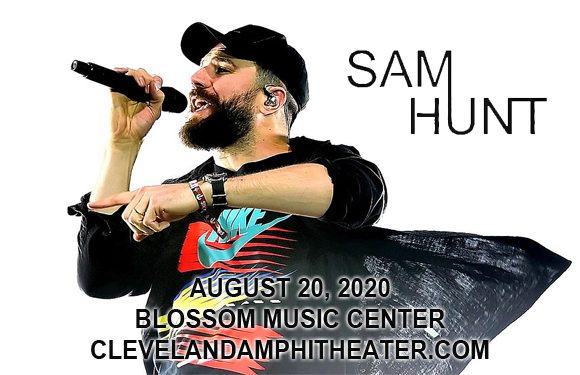 A successful college quarterback, Sam Hunt very nearly pursued a career in sports, but in 2008, he decided to make the move to Nashville to see where a life in music would take him. He got signed as a songwriter and spent several years writing for other artists, scoring a number one hit when he co-wrote Kenny Chesney's "Come Over", for which he won an ASCAP award. After that, he wrote for a number of high profile country singers, including Keith Urban, Billy Currington, and Reba McEntire, among others. His writing caught the attention of MCA Nashville, who signed as a solo artist in 2014, and later that year he released Montevallo, his record-breaking debut album, which launched four number one singles on the Country Airplay chart, making him the first artist to do so from a debut studio album. The album also scored three number one hits on the Hot Country Songs chart. In 2020, Hunt releases his second studio album, Southside, which has been preceded by three singles, including "Body Like a Back Road," which was released in 2017 and is his highest-charting hit, reaching number 6 on the Billboard 200.