When you think of the word "icon", Rod Stewart is the definite article! A consummate showman with one of the most sensational voices in the industry, this veteran performer has an exceptional back-catalog to draw from, so fans seeing him live can expect a set list of singalong pop tunes and standards from over 50 years in the industry! Stewart comes to Blossom Music Center on Tuesday 19th July 2022 (Rescheduled from Wednesday 28th July 2021) for an intimate evening of hits that will engage and beguile! Joining him will be one of the hardest-working rock bands on the touring circuit, Cheap Trick! 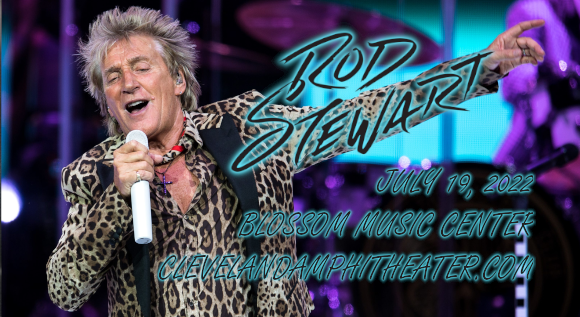 From young busker to veteran star, Rod Stewart's career trajectory has seen him traverse an incredible five decades in the music industry, and today he is one of the world's best-selling music artists of all time, having sold over 120 million albums worldwide since his career began. Not only is he an astoundingly successful solo artist, but Stewart has also been the frontman of two huge rock bands – The Jeff Beck Group and The Faces. Since the 1960's he has charted nine number one albums on the UK Albums Chart and a whopping 62 UK hit singles, including 31 top 10 hits and six number ones. Across the pond in the US, he has also enjoyed chart success, with 16 top 10 singles, including four Billboard Hot 100 number ones. Stewart's musical legacy has been noted by a number of prestigious organisations over the years, and he has both a Brit Award for Outstanding Contribution to Music, as well as a Grammy Award, and he has been inducted into the Rock and Roll Hall of Fame twice (once as a solo artist, in 1994, and as a member of the Faces in 2012), as well as the UK Music Hall of Fame. He was knighted in 2016 for his charity work and his service to music.