Beloved country-pop trio Rascal Flatts are back on tour for the summer and headed to Blossom Music Center on Friday 17th August 2018 for a fun and lively full of wall-to-wall hits! The 'Flatts fellas will be joined by Dan and Shay & Carly Pearce in support, and it looks like they're pretty happy to be back on the road:

“I can’t describe how much we are looking forward to the tour this summer!” singer Gary LeVox says in a press release. “We’ve been lucky enough to be in a position to tour consistently throughout our career, and last year felt like the perfect time to reset as we focused on the release of our 10th album. Coming back this year and with our friends Dan + Shay, who are some of the best guys around, as well as Carly who had an amazing year last year, makes it all the more exciting! It’s going to be an awesome time for us and the fans!" 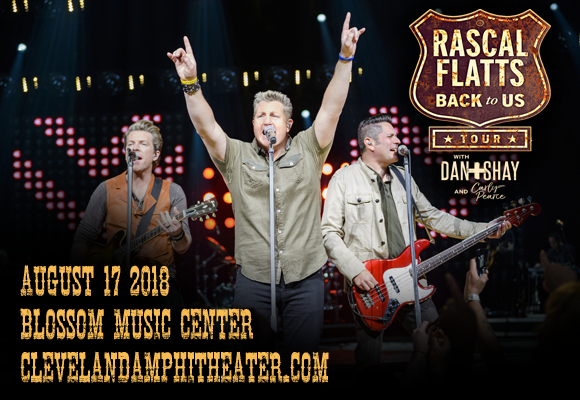 Country vocal trio Rascal Flatts formed in Columbus, Ohio in 1999 and were signed to Disney Music Group's Lyric Street Records just one year later. The band has released eleven studio albums to date, with seven of them rated platinum or higher by the RIAA, launching twenty-five top twenty singles on the Billboard Hot Country Songs Chart, including thirteen number ones. The band released their most recent studio album, Back to Us, in 2017, earning the group their twelfth top ten album on the Billboard Top Country Albums chart.