Pop giants Maroon 5 will be taking to the stage at Blossom Music Center on Thursday 26th August 2021 for an electric show that sees them busting out all their dance-worthy hits, including "This Love", "Moves Like Jagger" and "Girls Like You"! The group, who are one of the world's best-selling bands, will also be performing songs from an upcoming seventh studio album, as well as a few surprises! Maroon 5 are going to be joined by special guest support acts Meghan Trainor and Leon Bridges! 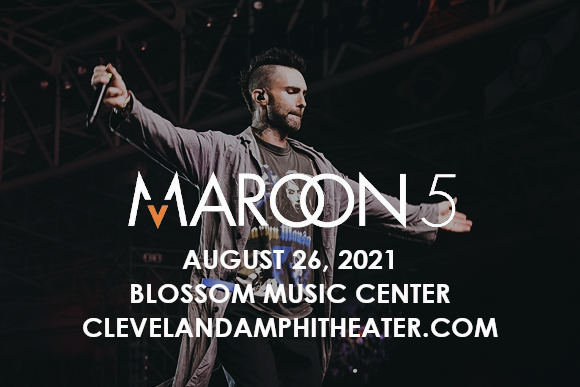 Formed of lead vocalist Adam Levine, keyboardist and rhythm guitarist Jesse Carmichael, bassist Mickey Madden, lead guitarist James Valentine, drummer Matt Flynn, keyboardist PJ Morton, and multi-instrumentalist Sam Farrar, Maroon 5 is one of the world's best-selling bands, having sold over 120 million records globally. After forming as Kara's Flowers in 1994, the group had moderate success with one self-released album (1995's We Like Digging?) and one album on Reprise Records (1997's The Fourth World), before changing their name in 2001 when they signed to Octane Records. The following year, they had their breakthrough with the album Songs For Jane, which began a career that has seen them chart six multi-platinum-selling top ten albums on the Billboard 200, including three that have reached number one. To date, the band has been honored with three Grammy Awards, three American Music Awards, three People's Choice Awards, five Teen Choice Awards, and eight Billboard Music Awards.