If you're a fan of Logic, then you can’t afford to miss this MASSIVE show!! Logic is on tour with NF and Kyle coming to the Blossom Music Center on Friday 6th July 2018! Tickets on sale NOW and expected to sell out FAST, so don’t delay – grab yours today while you still have the chance!! 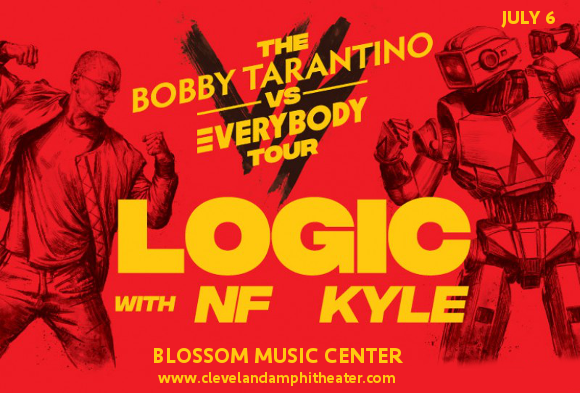 Rapping as a teenager, Logic (the stage name of Sir Robert Bryson Hall II) released his first mixtape “Logic: The Mixtape” in 2009. Three more mixtapes later and he gained the attention of the critics with “Young Sinatra: Welcome to Forever,” and a recording contract with Def Jam Recordings. On this label he released “Under Pressure” his first album to chart in the top 5 of the Billboard 200. From there Logic’s career has been a steadily escalating success – his most recent release, “Bobby Tarantino II” has just become his second album to hit No.1 on the Billboard 200!! But it’s all about to come to a close soon enough – Logic has confirmed that his next album, “Ultra 85,” will be his last.

“"I’m going to do something that has not been done in hip-hop before, and I mean that conceptually as well… it’s the quadraptriology," the rapper said. "If they’re putting on the next one, it must live in that Incredible True Story universe, and it’s going to be a story to end all stories, including my own. “

This could be one of your last opportunities to catch Logic live, so don’t miss it!! Grab those tickets today!!