One of the most popular roots rock bands of the 1990s, Hootie & The Blowfish, have reunited after a decade-long hiatus and they're coming to Blossom Music Center on Friday 26th July 2019! The chart-topping band will be coming together to celebrate the 25th anniversary of their smash hit debut album Cracked Rear View on the Group Therapy Tour! The tour will not only include all your favorite Hootie hits, but also brand new material from their crazy exciting upcoming album – their first since 2005! They'll be joined in support by none other than the Barenaked Ladies! 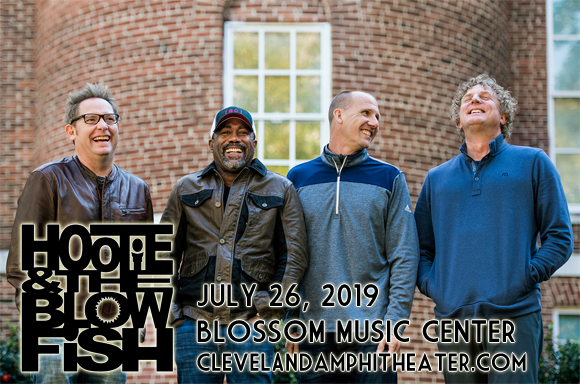 American roots rock band Hootie and the Blowfish burst onto the scene in 1994 with their smash hit debut album Cracked Rear View. Formed of Darius Rucker ( lead vocals, rhythm guitar), Mark Bryan (lead guitar, backing vocals, piano), Dean Felber (bass guitar, backing vocals, piano) and Jim Sonefeld (drums, percussion, backing vocals, rhythm guitar), the group came together in Columbia, South Carolina in 1989. Their debut album was an international success, launching four hit singles ("Hold My Hand", "Let Her Cry", "Only Wanna Be with You", and "Time"), becoming the best-selling album of 1995, and winning the band a Grammy Award for "Best New Artist" in 1996. Eventually, Cracked Rear View sold over 21 million copies and became the 19th-best-selling album of all time. Before their hiatus in 2008, the band had charted sixteen singles on various Billboard singles charts and released five studio albums. In 2018, the band announced its reunion, leading to a nationwide tour and a brand new album in 2019.