Philly soul dream team Hall and Oates are on the road once again with a brand new tour, coming to Blossom Music Center on Tuesday 17th August 2021! The iconic hitmakers and Rock and Roll Hall of Fame inductees spend a lot of time on the road and always put on an excellent show. This year, they'll be joined by British New Wave band Squeeze and Scottish singer-songwriter KT Tunstall in support, for a hugley entertaining and eclectic show!

“Can’t wait to get out there and have some fun playing with my friends,” Daryl Hall said in a press release. Bandmate John Oates added, "I’m really looking forward to a big time 2020 tour! Having KT Tunstall and Squeeze on the bill with us is just gonna make for an amazing night of music. Can’t wait to see you all on the road." 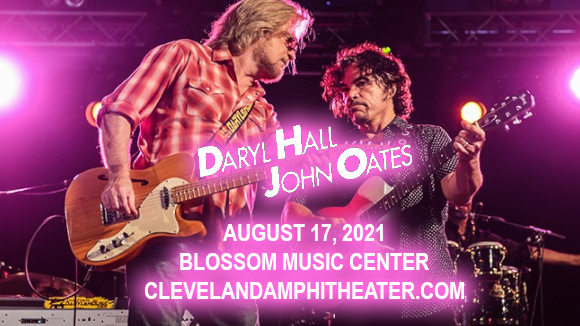 Inductees into the Songwriters Hall of Fame (2003), the Rock and Roll Hall of Fame (2014) and the Hollywood Walk of Fame (2016), Daryl Hall and John Oates are an American pop rock duo, whose unique spin on Philedelphia blue-eyed soul brought them fame and success throughout the 1970s and 1980s. Meeting in the late-1960s when they were both students at the Temple University, they discovered they had a shared love for many of the same acts and began to write and perform together. Their breakthrough came in 1975 with the release of their self-titled fourth studio album. Over the course of their career, they have become the best-selling musical duo of all time with over 40 million records sold worldwide. They are best known for their number one hit singles "Rich Girl", "Kiss on My List", "Private Eyes", "I Can't Go for That (No Can Do)", "Maneater", and "Out of Touch".