Witness the world's biggest bands Foreigner as they head out on tour for 2020 and bring their beloved and classic songs to the live stages across North America! That's right this summer you can catch Foreigner in concert along with support on their exclusive shows from Kansas & Europe! All of these iconic bands will be coming to Blossom Music Center on Wednesday 29th July 2020! Book your tickets today for an unforgettable, life changing night of pure entertainment! 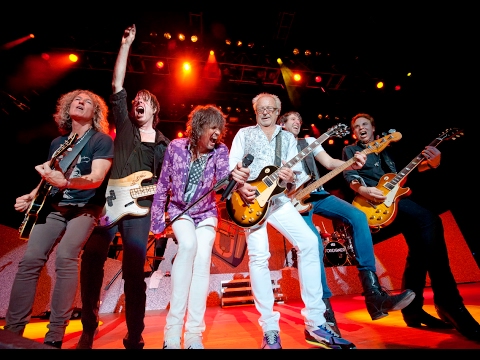 As one of the biggest rock bands of all time, Foreigner have truly made their mark on music history as a whole. With their groundbreaking catalogue of music they transformed the music scene particularly during the 1970's and 80's with their anthem based songwriting abilities. Their current members include Mick Jones, Thom Gimbel, Jeff Pilson, Kelly Hansen, Michael Bluestein, Chris Frazier and Bruce Watson. Together their impeccable performance talents shines through at each and every one of their concerts making them a firm favorite on the live American music scene.

Throughout the decades, Foreigner have reached the top with countless of hit songs from "I Want to Know What Love Is", which became an absolute hit in the UK and US charts and remained to be their biggest release to date. Along with their unforgettable track "Waiting for a Girl Like You", which gave them another impressive number two spot on the US charts and became a record breaking moment for the band as they stayed at the same place for an unbelievable ten weeks in a row!

As one for the greatest selling bands of all time, not just within the US, but all around the globe, Foreigner have proven their superstar quality and gained over eighty million record sales worldwide! Foreigner's collection of unforgettable songs have become beyond famous and have always remained in honour to their legendary career throughout the years… their powerful energy still remains today, making their 2020 dates a dream come true for any Foreigner fan.

If you love this iconic band then be sure to grab your tickets for your chance to see Foreigner live in concert as they embark on their epic 2020 North American tour and give their US fan base a real treat to the eyes and ears! Be prepared to be blown away and to make memories for many years to come!