There's just no slowing down for country megastar Dierks Bentley, who brings his eagerly awaited Burning Man Tour to Blossom Music Center on Thursday 25th July 2019! The performer, whose stage shows are known for their top-quality production, tongue-in-cheek humor and carefully curated support line-ups, blew fans away with last year's The Mountain Tour, and it looks like this year will be just as spectacular:

Dierks will be joined in support by Jon Pardi & Tenille Townes! 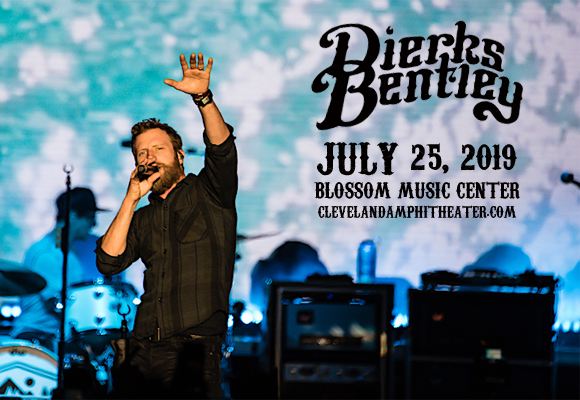 Dierks Bentley is a fourteen-time Grammy Award-nominated country singer and songwriter. Bentley found instant success with his self-titled 2003 debut album, which peaked at number four on the Billboard Top Country Albums chart and number 26 on the Billboard 200. The album was also registered platinum by the RIAA, after selling over one million copies. Bentley followed with 2005's Modern Day Drifter, which was also certified platinum, and 2006's Long Trip Home, which was certified gold. To date, Bentley has charted sixteen number-one and six top five singles on the Billboard Hot Country Songs and Country Airplay charts, and has released ten studio albums, his most recent being 2018's The Mountain.