A decade after their last tour, the inimitable country music duo Brooks and Dunn are headed to Blossom Music Center on Friday 18th September 2020! The twosome have not been entirely out of the limelight, however, having begun a Las Vegas residency with Reba McEntire in 2015, and now they're bringing some of that magic on the road!

“The memories of playing live are what have kept the fire burning for us,” said Kix Brooks. “Performers who have had the kind of nights like we’ve had with our fans, can never really let that go. Live is where we’re most at home, and it's gonna feel good to be back in the saddle, let’s rodeo." 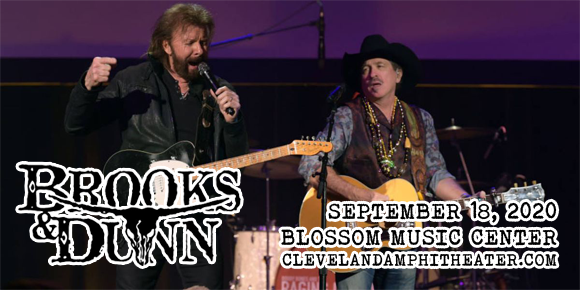 Country music duo Brooks & Dunn (formed of vocalists and songwriters Kix Brooks and Ronnie Dunn) began performing together in 1990, after songwriter and Nashville-based music executive Tim DuBois suggested they join forces. Originally solo artists, they signed as a duo to Arista Nashville in 1991, and had a number one on the Hot Country Songs chart that June with their debut single "Brand New Man". They have released 50 singles to date, including 20 number one singles on the Hot Country Songs chart, and 19 more that reached the top 10. Their number one hits "My Maria" (a cover of the B.W. Stevenson song) and "Ain't Nothing 'bout You", were the top country songs of 1996 and 2001 respectively. Bar only two records, all of Brooks & Dunn's studio albums are certified platinum or higher by the Recording Industry Association of America. In 2009, the duo announced that they were retiring from music, but in 2015 they teamed up with Reba McEntire for a Las Vegas residency that has lasted five years so far – the longest running country music residency. They have won the Grammy Award for Best Country Performance by a Duo or Group with Vocal two times, and in 2019, they were inducted into the Country Music Hall of Fame.