The bona fide kings of line-dance, Brooks and Dunn, are grapevining their way to Blossom Music Center on Friday 17th September 2021 for the Reboot 2021 Tour! The award-winning, best-selling duo's tour is their first on the road together for a decade and fans are guaranteed something truly special from the iconic pair! The Country Music Hall of Famers will be joined in support by Travis Tritt and Elvie Shane! 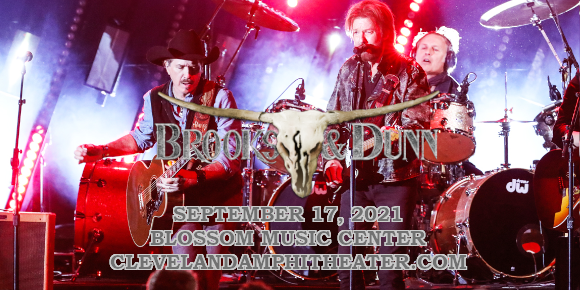 Vocalists and songwriters Kix Brooks and Ronnie Dunn formed country music duo Brooks and Dunn in 1990, after carving out careers for themselves as successful solo artists, having both had hits in the 1980s. With their unique neo-traditional take on country, they have become the genre’s most successful duo of all time. Their prolific career has produced 11 studio albums and five compilation albums, launching 50 singles. 20 of their singles went to number one on the Hot Country Songs charts and 19 more reached top 10, including "My Maria" (a cover of the B.W. Stevenson song) and "Ain't Nothing 'bout You", which were the top country songs of 1996 and 2001, respectively. Nine of the duo's studio albums are certified platinum or higher by the Recording Industry Association of America; their highest-certified is their 1991 debut album, Brand New Man, which is certified six-times platinum. The pair are also highly-awarded, with 17 Country Music Association awards, 26 Academy of Country Music awards and 2 Grammy Awards under their belts. In 2009, they announced their retirement, but reunited in 2015, much to the delight of fans the world over.