One of the biggest breakthrough acts of the 1990s, Alanis Morissette rocked the world with the release of her candid grunge-pop album Jagged Little Pill. Celebrating 25 years since its release, and the launch of a Broadway musical inspired by the album's songs, Morissette will to Blossom Music Center on Wednesday 8th September 2021! Get ready to sing your lungs out to classics like "You Oughta Know", "Hand in My Pocket", "Ironic", "You Learn", "Head over Feet" and "All I Really Want", as well as hearing songs from Morissette's new album, Such Pretty Forks in the Road! She'll be joined by fellow 90s icons Garbage and Liz Phair! 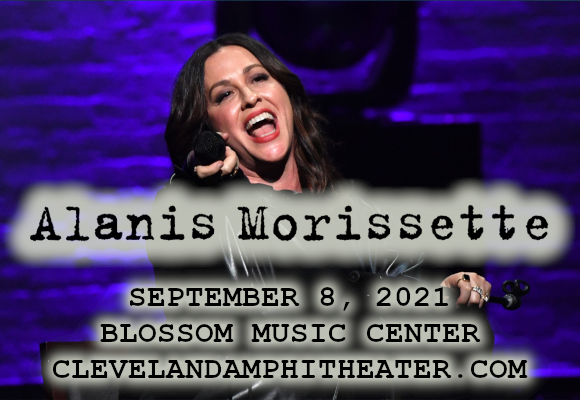 Alanis Morissette began her career in Canada in the early 1990s, finding platinum-selling success there with her first two dance-pop influenced albums. In 1995, having relocated to America, she released Jagged Little Pill, which brought her worldwide fame. Jagged Little Pill was a huge success, remaining in the top 20 on the Billboard 200 albums chart for over a year and selling more than 16 million copies in the U.S. It also sold 33 million copies globally, and became the second biggest-selling album of all time by a female artist. The album was certified 16-times platinum in the US, making Morissette the youngest artist at the time to be certified diamond there, and went 12-times platinum in Canada. For the album, Morisette won awards for Best Female Rock Vocal Performance, Best Rock Song (both for "You Oughta Know"), Best Rock Album and Album of the Year at the 1996 Grammy Awards, from nine nominations, as well as six Juno Awards. In 2020, she releases her ninth studio album, Such Pretty Forks in the Road.